I've been lazy, but i'm back and so are the All Blacks!

Well it's safe to say that I have neglected my blog to the point that I have had folk asking when I’m gonna get my finger out and write some more stuff. As everyone knows its far too easy to fall out of routines and keep habits going. Its not hard to find something else to do or pretend that you'll get round to doing that thing later. Apologies for the neglect but i’ve been keeping busy.

The long and short of it is that I’ve been grafting.. Things have been busy at ACE Property Management and that creates plenty of stories and topics from the last couple of months that I’m currently streaming from my head through my arms and out of my fingers that I'll get posted soon.

More importantly though there’s a big game at Murrayfield tomorrow. I can’t wait to see Scotland give the All Blacks a run for their money on Sunday.

A massive task for Scotland this weekend but it's 15 against 15 for 80 minutes so lets get a result boys. Look at Celtic last week. Celtic are now the best club team in the world after beating Barca!! HA! Scotland could be world champions if they beat the AB's. I wonder if they have that posted on the changing room wall? 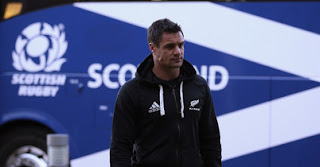 I read an article from a Kiwi reported called Chris Rattue that was printed in the Scotsman last week which was banging on about the All Blacks wasting their time by playing Scotland and generally that the northern hemisphere tours were too easy for New Zealand. It claimed that the team would get more out of playing the pacific island teams like Samoa and Fiji. It goes deep into the facts and figures of previous results and stats create a strong argument that the outcome of the game is guaranteed before the game is started. What I'd like to say to the Kiwi reporter is that Dan Carter tweeted this week that he tried Irn Bru for the first time and liked it!! The players love it over here. Scotland is a cracking place to come and play and when Murrayfield is packed to the rafters it must be a great experience for the All Blacks. The SRU wins in ticket sales and what the All Blacks do for the rugby community is superb. They create a buzz wherever they go and the part time rugby fans get off their sofas and get to the game. Long may the Autumn Internationals continue I say!

I hope tomorrow proves to be an exciting game and Scotland can give us a performance to be proud of. Good luck to Kelly and the team.